First, the peach tree is deficient in nitrogen: the young leaves are small and thin, the severe nitrogen-deficient mesophyll is reddish brown and necrotic, the branches are yellowish green and turn red, the fruit is hard, the sugar content is high, but the yield is low.

Second, the peach tree is deficient in phosphorus: the mature leaves are red-purple or bronze-colored, the leaves are narrow and long, and the petiole, leaf back and veins are purple-red.

3. Peach tree deficiency: Potassium is prone to potassium deficiency. The leaves and veins in the middle part of the new shoot are chlorotic and wrinkled upwards, the leaf edge is rolled up and bent backwards, and the tip of the leaf is faint green or reddish. The leaves are burnt and necrotic. Branchlets slender, internodes long, less flower buds. The fruit is small and small.

4. Peach tree deficiency calcium: The demand for calcium in peach trees is smaller than that of apple trees, and the peach-deficient leaves are spotted, and the calcium-deficient peach trees are prone to soft rot.

5. Magnesium deficiency in peach trees: Peach is sensitive to magnesium deficiency, with pale green spots or gray-green spots between the leaves, often spreading to the leaf margins, and rapidly turning into yellowish brown to dark brown, followed by necrosis between leaves and leaves, leaves Shedding, the top is a rosette-like leaf cluster, the leaves are thin and pale, when the fruit is not mature, the fruit is poorly colored and the flavor is poor.

Sixth, the peach tree is deficient in sulfur: the new leaves are green and yellow, the tip of the leaf is evenly yellowed, and the tip is severe, the fruit is small and deformed, the color is light, the skin is thick, and the juice is less. The symptoms of copper deficiency in peach trees are similar to those of apples. The leaves are chlorotic and malformed, the branches are curved, and there is a gelatinous blister-like brown or russet rash on the bark, and yellow or red gelatinous substances flow out during the rainy season. In severe cases, the leaves fall off and the branches die. The skin of the fruit also flows into a gelatinous substance, which becomes irregular brown spots, and the fruit is small and easy to crack and easy to fall off.

Seven, peach tree iron deficiency: peach trees are prone to iron deficiency. The leaves of the new shoots are chlorotic and yellow, which is called "yellow leaf disease". The degree of chlorosis is increased from bottom to top. The incidence of summer and autumn shoots is more than that of spring shoots. The diseased leaves are mostly clear mesh-shaped mosaics, also known as "yellow flowers". Leaf disease." If it is severely yellow and white, the leaf edge can also be burned, dried, and shed early, forming a tip or a bald branch. This situation can be repeated, which can lead to the decline of the whole plant.

8. Peach tree deficiency of manganese: When the peach tree is deficient in manganese, the chlorosis between the veins is light green, the main vein is still green, the veins are chlorotic, and there are spots, which develop from the leaf margin to the midrib. The brown veins are brown and necrotic, and the leaves are all yellow.

Nine, peach tree zinc deficiency: the new leaves become narrow and chlorotic to form variegated leaves, varying degrees of wrinkled leaves, short shoots, near the top internodes are rosette-like clusters of leaves, early shedding. The fruit is deformed and has no practical value.

Flake Graphite is a natural crystalline Graphite . It is shaped like fish phosphorus, and is a six-square crystal system. It is layered and has good properties of high temperature resistance, conduction, heat conduction, lubrication, plasticization and acid and alkali resistance.

Flake graphite is a natural solid lubricant of layered structure, rich in resources and cheap in price.

The flake graphite crystallization is complete, the film is thin and the toughness is good, the materialized performance is excellent, has the good thermal conductivity, the conductivity, the thermal shock resistance, corrosion resistance and so on.

In December 2015, geological prospectors found a large scale graphite mine in alashan, Inner Mongolia. The total amount of graphite resources was 1. 300 million tons, about 7 of the world's recoverable reserves. 3%, average grade 5. 45%. According to the introduction, such high grade, large-scale Graphite Mineral deposits are rare in China. [1]

In 2013, the U.S. geological survey reported that the global scale of graphite minerals was less than 5 million tons. The discovery was made in alashan, which has a large scale of 703 million tons of graphite in the area of zahan mushi.

Classification by size of granularity

When the particle size is smaller than w38 micropowder graphite.

The flake graphite as the functional filler of coating is mainly used for anticorrosive coating, fire retardant coating and conductive coating.

As an anticorrosive material, it has anti-rust primer, such as carbon black, talcum powder and oil, which has good corrosion resistance of chemicals and solvents. If you add zinc and yellow to the formula, it is better to rust.

A graphite interlayer compound obtained from Natural Graphite scales as raw materials, chemically or electrochemically treated. Expandable graphite under the condition of heat, swelling volume (up to 300 times) suffocate the flames, at the same time generate inflation, to isolate the flame, delay or interrupt the effect of flame spread, and itself does not burn, good flexibility, high surface energy, intensity of carbonized layer. But the volume and dosage of the expansive body should be suitable. The test shows that the 150um particles, 30% expansion multiples and 5% dosage are the most suitable.

The flake graphite can be directly used as a carbon conductive filler and can be made into a composite conductive filler for conductive coatings. However, due to the large addition of graphite flake, the coating can be brittle and its application is limited. Therefore, measures are taken to further improve the conductivity of graphite and effectively reduce the amount of graphite flake. Our domestic chemical machinery research institute has developed a high temperature and corrosion resistant resin as basic material, with the strong ability of conducting electrostatic entities large flake graphite flake as the main aggregates, with high intensity of ontology Good abrasion resistance.

The anti - deformation cracking - good short - cut fiber material is a solvent - free thick film conductive coating. The coating has the characteristics of anti-corrosive media penetration, small residual stress, good anti-matrix deformation, stable construction performance and long - term conductive static. Can be used in oil tank inner wall guide electrostatic coating. With electroless plating technique, according to the data of graphite powders metallized, such as copper, nickel, silver, such as the preparation of composite conductive filler, with 30% of the amount used in conductive coating, not only its conductivity is very good, and further improve corrosion. 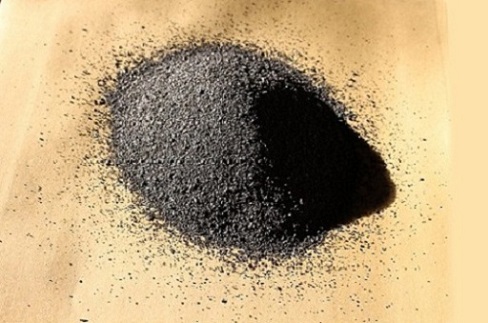